You are using an out of date browser. It may not display this or other websites correctly.
You should upgrade or use an alternative browser.

Datura inoxia (angel's-trumpet, thorn-apple, downy thorn-apple, Indian-apple, moonflower, sacred datura, or toloache) is a poisonous species belonging to the Solanaceae family. It is a native of Central and South America and has been introduced into Africa, Asia, Australasia and Europe.

It is an annual plant that grows to a height of 1.5 metres. Its stems and leaves are covered with short and soft grayish hairs. All parts of the plant produce a foul odour when crushed or bruised.

The flowers are white, with a very strong sweet fragrance, trumpet-shaped, 12-19 cm long. They first grow upright and later bend downwards. It flowers from early summer until late autumn. The flowers open in the early evening and each flower lasts only 24 hours. The flowers are hermaphrodite (have both male and female organs) and are pollinated by insects.

The seeds are contained in an egg-shaped spiny capsule, about 5 cm in diameter. It splits open when ripe, releasing the seeds. The seeds can hibernate for years in the soil. The seeds are also hallucinogenic.

Datura inoxia, like other Datura species, contains the highly toxic alkaloids atropine, hyoscine (scopolamine), and hyoscyamin. At suitable doses these substances are used in medicine. They were used in folk medicine throughout the world and later on in scientific medicine. Datura plants are highly toxic, and if ingested, can cause hallucinations and even seizures. 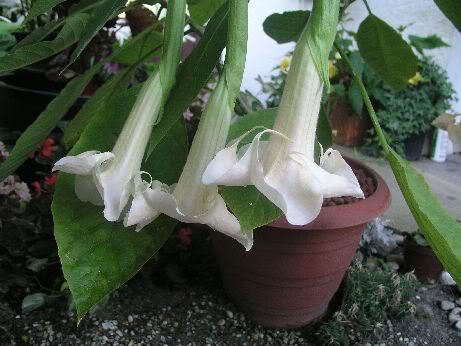